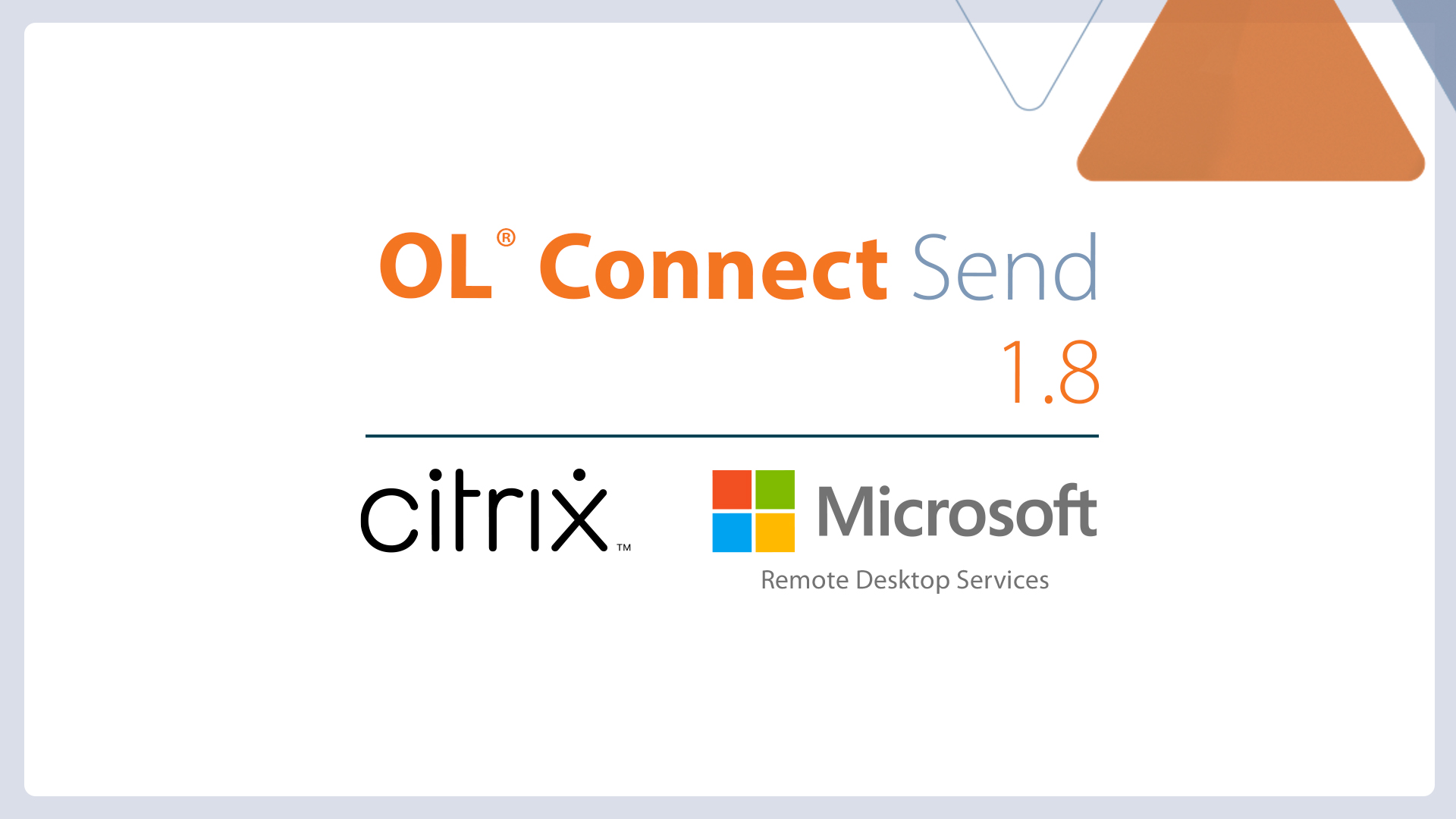 With the release of version 1.8, OL Connect Send (OLCS) introduced support for Citrix and Microsoft Remote Desktop Services (RDS). This means users in those environments are now able to print with the OLCS client and have the interactivity of the browser pop-up. This article explores the major changes that were implemented in OLCS to support Citrix and RDS.

Citrix and Microsoft Remote Desktop Services* (formerly known as Terminal Services) are similar environments in terms of their requirements for integrating OL Connect Send functionality. Both Citrix and RDS are used to allow many users, up to hundreds, to work on a single server.

To support these environments, it is essential to properly distinguish different users on the same system. We did not need to add any new functionality for this, but several things had to be addressed both in the OLCS client as well as in the OLCS server compoienents, which are part of the OL Connect Workflow.

The result is that it is now possible to use the OLCS client interactively on Citrix or RDS, and have the browser pop up properly.

One aspect of running on a system with potentially hundreds of users is that it is not desirable to have an app permanently use memory for each user currently logged. OLCS comes with a Notifier app that sits in the taskbar for each user, which is fine for a single user but wastes valuable memory when many users are logged in at once. We therefore removed the dependency between OLCS and the Notifier app, which allows the OLCS client to only use up memory when each user is actually printing.

To properly support multi-user environments, we have also changed the way user based licenses are checked. With many users simultaneously using a single server, those users need to be counted and distinguished.

Supporting an environment also means that you have to be able to test in that environment. Not just for the initial development, but also when having to support customers if an issue occurs. For RDS, our partnership with Microsoft gives us access to the necessary resources. For Citrix, we had to start from scratch.

Objectif Lune has now become a Citrix partner to get access to the necessary licenses and tools. In addition, we have enrolled OLCS in the Citrix Ready program.

Scope of Citrix and RDS support

Even though the OLCS client is now officially supported on Citrix and RDS, this does not mean that OL Connect itself is now supported in those environments. Neither PlanetPress Connect nor PReS Connect has been certified for Citrix or RDS, so those environments are still not supported. Note that this should be much of an issue as OL Connect is most usually run on its own Server, to which only a handful of people should have access.

As mentioned above, the way the user-based license for OLCS is being checked has changed with the introduction of OL Connect 2021.1 and OLCS 1.8. Instead of just checking the id of a machine, now the combination of machine and user is checked to see if the user limit has been reached.

For a typical business environment, where every user has their own desktop that they exclusively use, this change has no impact whatsoever.

However, in situations where multiple users regularly use a common system, more “seats” are required starting with version 2021.1, otherwise the system may notify you that the existing user limit has been exceeded, in which case adding more user seats should be considered.

The OLCS printer driver never relied on the OLCS Notifier app for correct operation. So, it was already possible to run OLCS without Notifier. When running OLCS in interactive mode, the feedback in the browser pop-up is already a pretty good indication of whether printing succeeded or not. When running in non-interactive mode, however, the Notifier is the only feedback a user gets.

But as explained earlier, running one Notifier app per user is simply not desirable in multi-user environments, because it has an unnecessarily large impact on memory usage.

To improve this, we introduced an alternative method to provide feedback to the user. It is now possible to have the OLCS client send a message directly to the user’s desktop instead of to the OLCS Notifier. However, since these notifications can be rather intrusive, this method will only be called for error conditions.

With the OLCS 1.8 release, this method is introduced “for user review”. This means we are looking for some feedback on the user experience for actual users. This is why enabling this functionality requires manually setting a registry key.

The same registry key can also be used to specify that no messages at all should appear other than through the browser pop-up, when interactive mode is available.

To set the beahvior of these notifications, you can set the this registry key to one of the following values:
<HKLM>/SYSTEM/CurrentControlSet/Control/Print/Printers/{Printer Name}/OLCS/ShowMessages
0: no notification messages
1: messages go to OLCS Notifier
2: messages go to desktop message box

Note that this registry key does not control whether OLCS Notifier runs or not. This can be controlled directly from Windows: go to the Startup tab on the Task Manager and enable/disable the OL Connect Send Messages component.

Regardless of whether the user gets notified or not, system administrators can always see if errors occur while printing through OLCS, by looking at the Windows Event Viewer. This was also the case in previous versions of OLCS.